Against a backdrop of 73 names of past and present servicemembers related to the Gann community, a senior described living through her father’s deployment to Afghanistan. A Gann professional then spoke of her son’s service in Iraq and invited a student to read a piece that her son had kept with his gear—a poem about an unassuming young man thrown into military service. Faculty, staff, and students shared classic “letters home” from the archives. Together, we listened to several more stories of veterans, in their own voices, through the StoryCorps archives.

On Veterans Day this year, we sought to tell the stories of veterans in a responsible manner. While we had no veterans within our immediate community, every student and professional who stood in front of the school was related to a veteran. The stories of service members—in the hands of family members—was our intergenerational effort to honor their legacy. 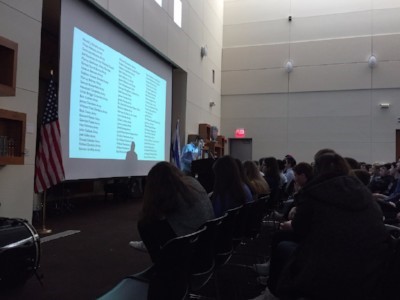 Later that day, as students perused tables of photos, artifacts, and memorabilia, I wondered what my Great Uncle Seth would have thought of our celebration. As I was growing up, my parents occasionally took me to visit Seth at his small rural home. I approached these visits with trepidation, as they rarely promised much amusement. Furthermore, I had, with youthful arrogance, assumed Seth to have led a rather unremarkable life. But on one visit my father prodded me to ask him about his time in the military. With a sigh, I obliged, and Uncle Seth showed me where he had stored some memorabilia and had hung a few photos on the wall.

I was the most surprised boy in North Georgia that afternoon. Captain Seth Howard had begun his naval career in World War II by surviving a Japanese torpedo attack and then capturing a German U-boat. Ascending military ranks, he commanded a Navy destroyer and kept the peace in the Taiwanese Straits. Uncle Seth served in heroic and leadership positions for nearly a quarter-century—and I had known nothing about it.

Our world is filled with those who have lived heroic lives. Many, especially veterans, have not shared their stories. After all, they trained both in the military arts and in the practice of anava (humility). Moreover, sharing those stories can sometimes be too much to bear. So, veterans often live their lives silently. We walk among these heroes, and yet we do not know them. Perhaps, this is as it should be; after all, anava is a primary soul-trait of our tradition.

But Mussar also teaches us that all people have their place. Every life has worth, and everyone has a seat at the table. Self-effacement should not be the outcome of anava. Veterans Day 2017 offered all of us at Gann a moment of time in which we could honor and bear witness to the lives of those who transcended their everyday selves and sacrificed to serve others. Our students, faculty, and staff rose to the occasion, sharing stories in an honorable way that would make any veteran—including Uncle Seth—justifiably proud.

We then closed our assembly with a prayer that included these words:

Guide them in peace, lead them toward peace, and return them speedily to their families alive and unharmed.
May we make space for everyone at our tables this coming week, and may we be good listeners.