I’ve been thinking lately about the economist Amartya Sen. After I read a recent piece at Aeon about Sen, I reflected back on my graduate school days, when reading his work first inspired me. I found Sen’s understanding of poverty to be groundbreaking and compassionate. In his acceptance speech for the 1998 Nobel Prize for Economics, Sen explained his position by asking:

Is deprivation not ultimately a lack of opportunity to lead a minimally acceptable life, which can be influenced by a number of considerations, including of course personal income, but also physical and environmental characteristics, and other variables (such as the availability and costs of medical and other facilities)? The motivation behind such an exercise relates closely to seeing poverty as a serious deprivation of certain basic capabilities. (my italics)

Or, to put it more simply:

The Aeon article points out the distinctive interdisciplinary and moral approach that Sen brought to his work. The author notes that “This was no feat of lonely genius or freakish charisma. It was an effort of ordinary human innovation, putting old ideas together in new combinations to tackle emerging problems.”

What made Sen such an outstanding innovator? Sen says that his career began with his childhood education at the Visva Bharati school in West Bengal, India (now known part of the Patha Bhavana school, an institution that is both a K-12 school and a college). Rabindranath Tagore, a Nobel Prize winning poet, founded the school in 1901.

Contemporary Patha Bhavana secondary students produced a video that captures Tagore’s ethos, still very much alive in the school today. According to the school’s website,

…unique features are open-air classes, personal contact between teachers and the taught, training in self-government. Besides curricular performance emphasis is given on co-curricular activities aiming to unfold a child’s personality through social, literary, artistic, musical and various other activities. 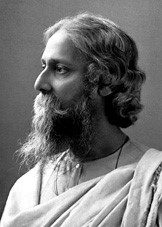 Tagore, from the Nobel Prize webpage

Patha Bhavana is fascinating on many levels. Here, I am intrigued by Tagore’s insistence that his teachers step down from their pedestals and interact personally with their students. Closeness to peers, to teachers, and to nature was essential for Tagore’s vision on how to grow curiosity and kindness. Tagore sought to recreate what he viewed as a long-lost experience of education. In Tagore’s own words:

[In] the ancient India the school was where life itself was. There the students were brought up, not in the academic atmosphere of scholarship and learning, or in the maimed life of monastic seclusion, but in the atmosphere of living aspiration. They took the cattle to pasture, collected firewood, gathered fruit, cultivated kindness to all creatures and grew in their spirit with their teachers’ own spiritual growth.

Tagore’s emphasis on relationships, shared spiritual growth, and the cultivation of kindness reminds me of our community at Gann. I wonder if the closeness of Sen’s peer and teacher relationships, combined with the empathy he felt toward those around him, moved the future economist toward such a strong stance of compassion in his career. At Gann, such intimacy and responsiveness would be well in keeping with the soul-trait of rachamim, or compassion, that we study together.

As educators, we offer much fertile ground in which our students can mature, morally and otherwise. Of course, we cannot know their futures; Tagore could not know the future of his students either. But Tagore knew that he was creating a special environment for his charges. Roughly a century ago he published this poem; it evokes, for me, both his school and ours:

Who are you, reader, reading my poems an hundred years hence?

I cannot send you one single flower from this wealth of the spring, one single streak of gold from yonder clouds.

Open your doors and look abroad.

From your blossoming garden gather fragrant memories of the vanished flowers of an hundred years before.

In the joy of your heart may you feel the living joy that sang one spring morning, sending its glad voice across an hundred years.

Student organizer Emma González created a Twitter account on Feb. 18— four days after the Parkland shooting. Now she has 1.2 million followers. She’s using Twitter to share messages of solidarity and to ridicule politicians about gun control.

“People always say, ‘Get off your phones,’ but social media is our weapon,” says student organizer Jaclyn Corin. “Without it, the movement wouldn’t have spread this fast.”

Errol Salamon. The Conversation. March for Our Lives Awakens the Spirit of Student and Media Activism of the 1960s.

In this article in Phi Delta Kappan, Guy Claxton (King’s College/London) uses the metaphor of a river to describe three levels of learning:

–   Knowledge and information on the surface, usually easy to see and describe (the Boston Tea Party, the periodic table);

–   Skills and literacies just below the surface, the expertise that enables students to use knowledge and information (reading, writing, solving a tricky new math problem, thinking in Spanish);

–   Attitudes and habits of mind deeper still; harder to see, these are the gradually developing processes that influence how students respond to difficulty, complexity, and frustration: Are they interested or threatened? Do they engage or wait to be directed? Are they willing to admit mistakes or do they try to cover up their fallibility?